IBF middleweight champion Arthur Abraham (27-0, 22 KOs) impressively knocked out Edison Miranda (30-3, 26 KOs) in round four of a hotly anticipated rematch at a 166lb catch weight on Saturday night at the Hard Rock LIVE Arena in Hollywood, Florida. Early on, Miranda outworked Abraham who mostly covered up. Abraham started to open up in round three landing some clean shots. In round four, however, Abraham explosively dropped Miranda three times and the bout was stopped. Time was 1:13. “I concentrated my right hand and pointed it directly at his chin,” said Abraham about the first knockdown. “I wanted to take care of him with the left,” he commented on the second knockdown. “I wanted to hit him with a right, but he turned his head so I hit him with the left,” he stated in regard to the final knockdown. Anyone up for Abraham-Pavlik? 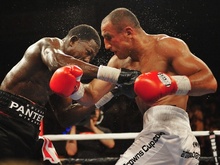 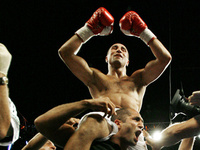